The most exciting event of the year took place in the sports complex of Guru Nanak Dev Engineering College, Ludhiana today, as it celebrated it’s 60th annual athletic meet with great fervor & enthusiasm. The event ushered the spirit of sportsmanship and unity in the atmosphere. Beginning of the meet was an opening ceremony by honorable Deputy Commissioner of Police  S. Simratpal Singh Dhindsa and guest of honor  S. Jagatpreet Singh(ADCP-SP).
The series of events began with march past by the students, followed by Olympic torch bearing ceremony and oath commemoration by the position holders. The chief guest of the day then unfurled the flag and declared the sports meet open. In his address to the audience he mentioned the importance of sports in life and motivated the students to stay fit by mentioning the benefits of exercising. Being happy on observing such an energetic genconians, he wished them success for the event. The event was then followed by the most awaited and eye catching event of the year, the Bhangra performance by the college Bhangra team and prize distribution ceremony.
The various sports events that were scheduled to be held included were 1500mts Final (Boys & Girls), 100mts Heats (Boys & Girls), High Jump (Boys & Girls), Javelin Throw (Boys & girls), 100m Hurdles Final (Girls), 110m Hurdles Heats (Boys), Shot-put Final (Boys & Girls),  400m Final (Girls), 400m Heats (Boys), Discus Throw (Boys & Girls), Triple Jump (Boys & Girls), 100m Semi-final (Boys & Girls), 5000m Final (Boys), 400m final (Boys), 4*400mts inter-deptt Relay (Boys & Girls),  100m class IV Employee Race, Tug of war prelims (Boys & Girls)
Further in a welcome note from the Principal, Dr. Sehijpal Singh, he showed gratitude to God for commencement of the event and thanked the chief guests of the day for gracing the occasion. He also emphasized on the importance of sports in student life. Health is wealth being the logo for the day, the flavours of sports sparkled grounds could be felt in the young and energetic aura of the college. On the second day, the event starts in the presence of the chief guest Bhupinder Singh Sidhu,Assistant inspector general of police STF Jalandhar range and additional charge of AIG Crime, Punjab. The spirit of the competition continued with the finale of racing events and Other challenging events like the 400mt hurdle race and the 10,000mts race which kept the audience at its edge while the hallmark of Gndec  sports meet, the iconic obstacle race, kept the audience entertained with its excitingly fun obstacles.The efforts of the D.P of the college, Dr. Gunjan Bhardwaj &  Shaminder Singh were noticeable as the events were well organized and were conducted smoothly.Chief guest for the day inspired the audience with his motivational speech where he elucidated on the importance of finding time for physical activities and maintaining their peak health besides unlocking their intellectual and academic potential.
The prize distribution ceremony coloured the stadium with shower of pride as the winners received awards.To conclude the event, Dr. Sehijpal Singh congratulates the winners and took. 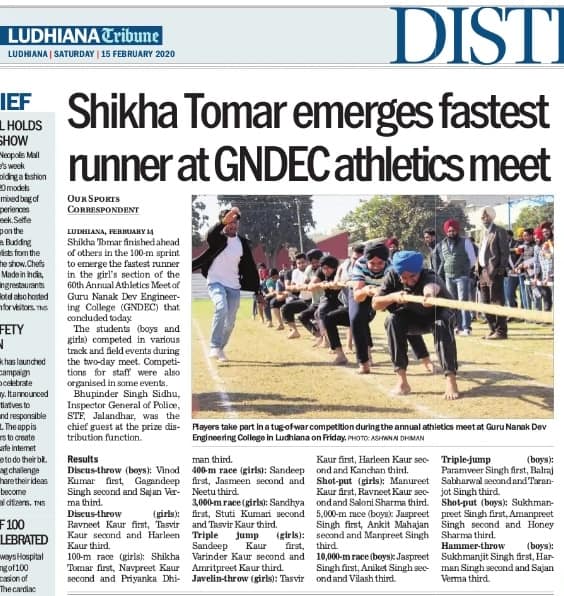 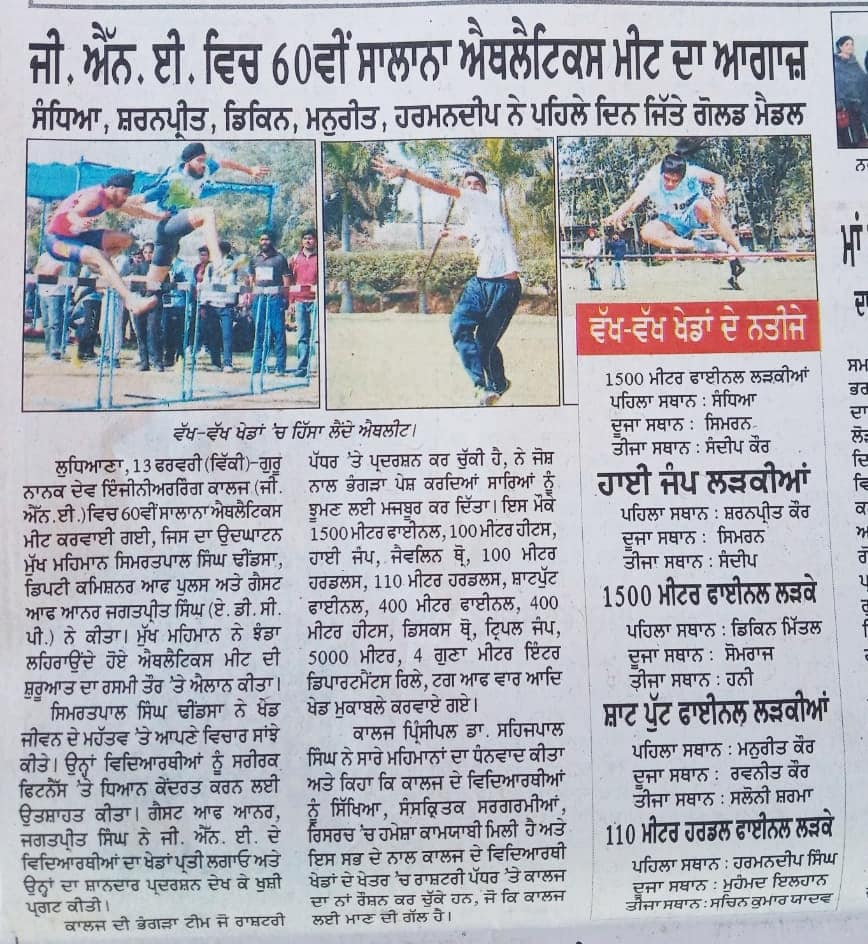 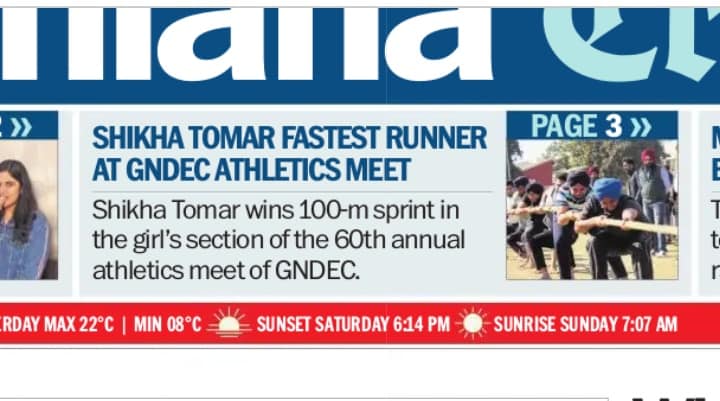 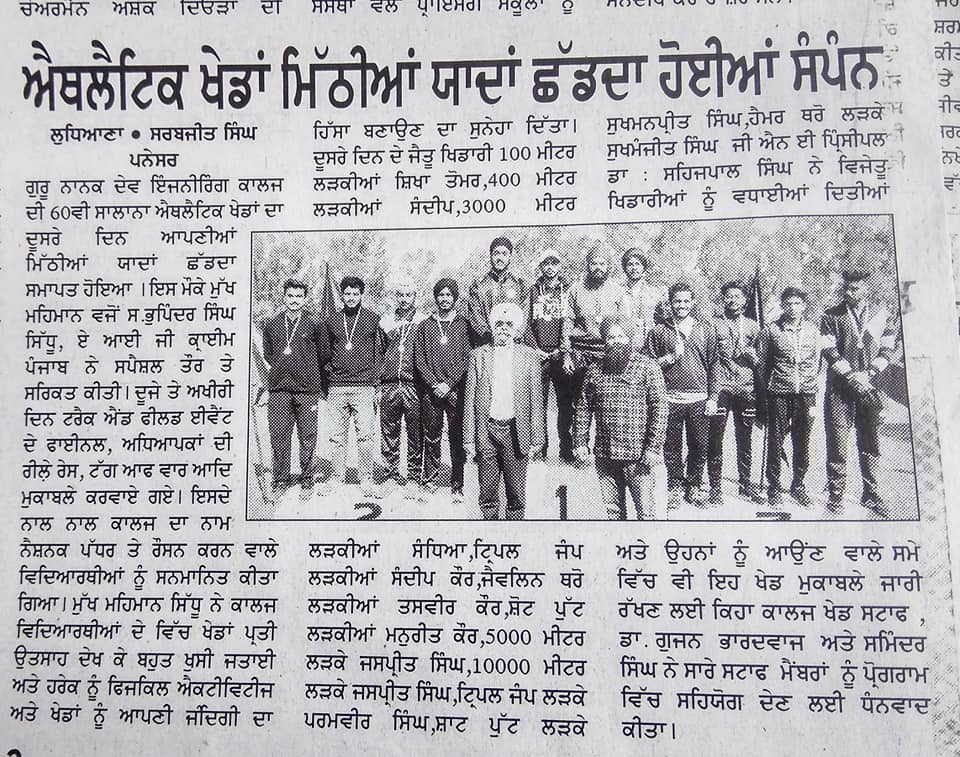 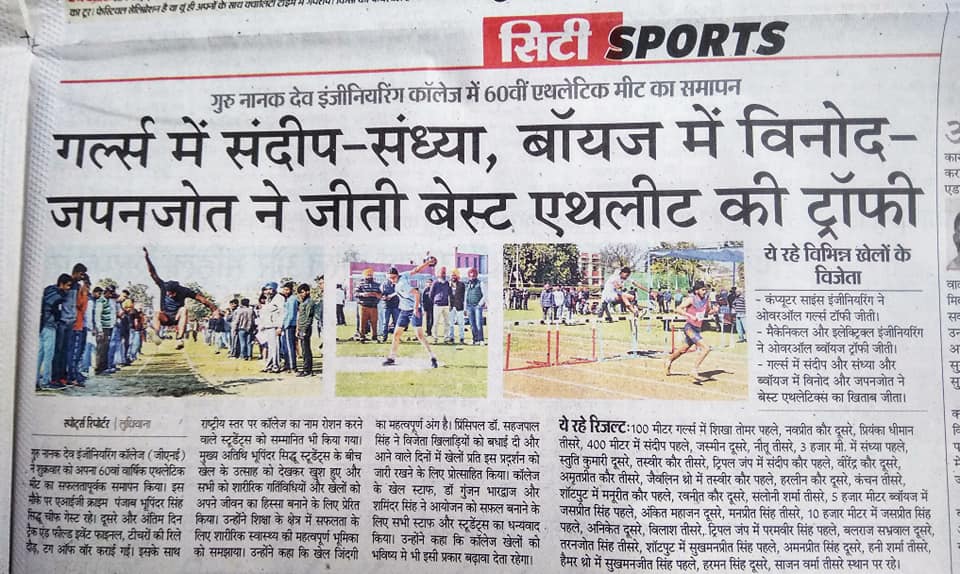 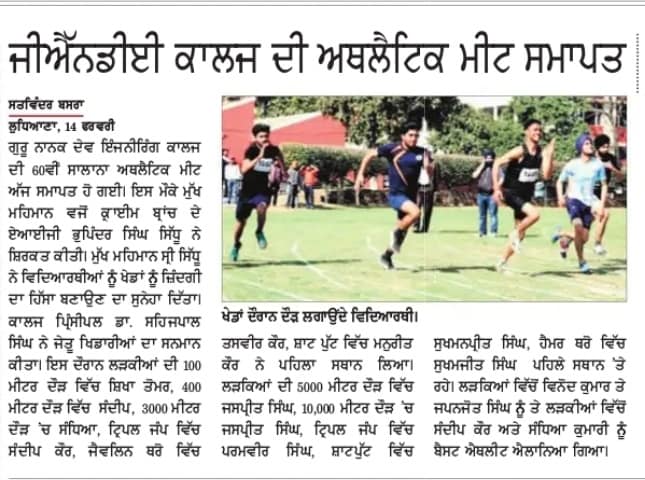 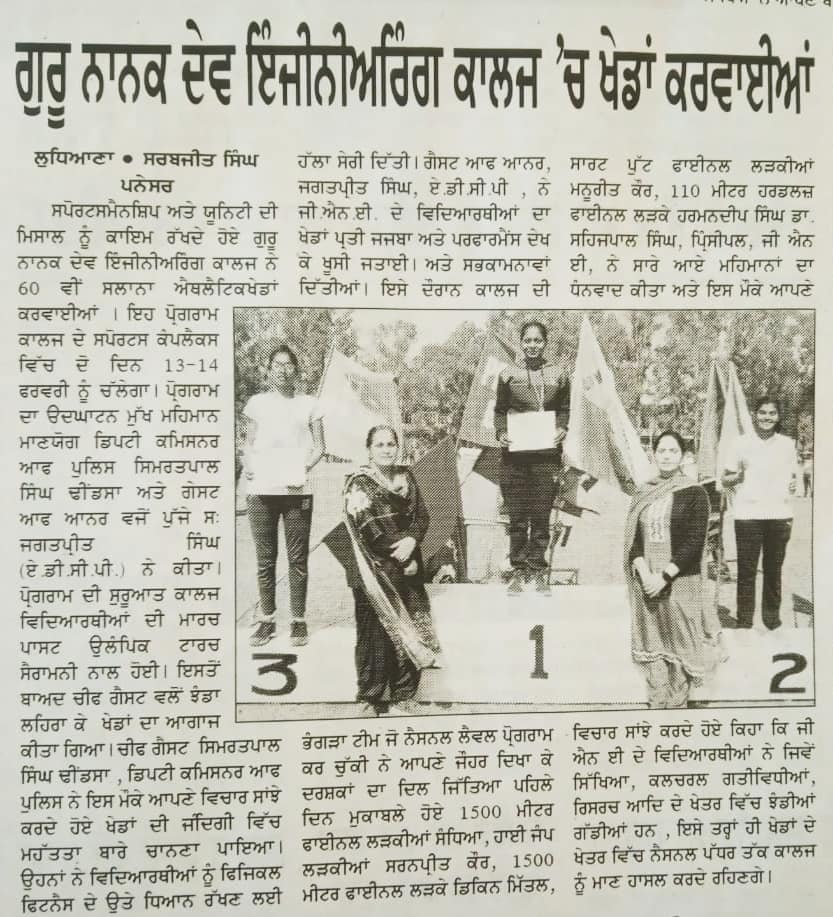 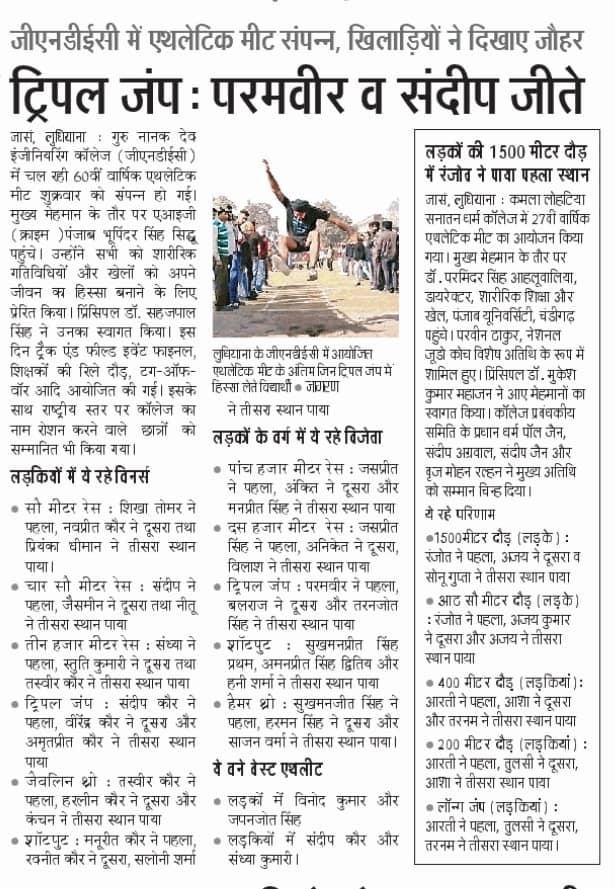 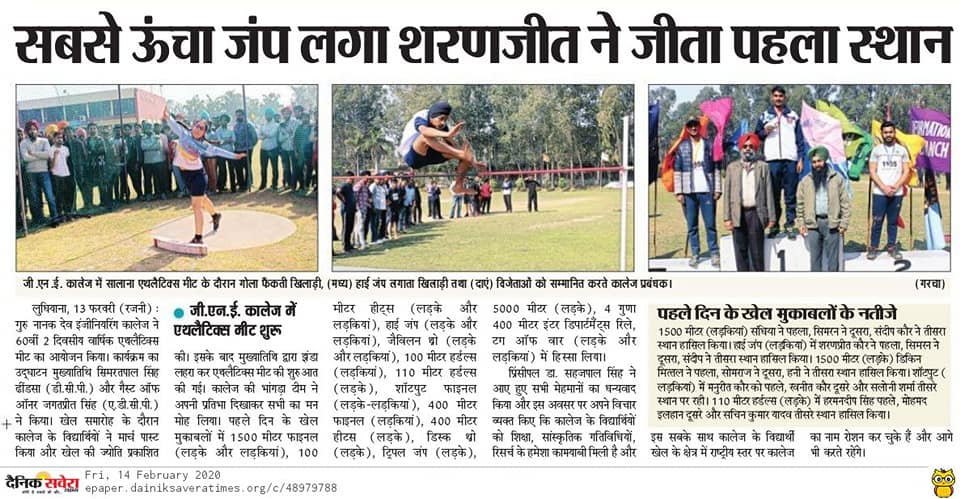 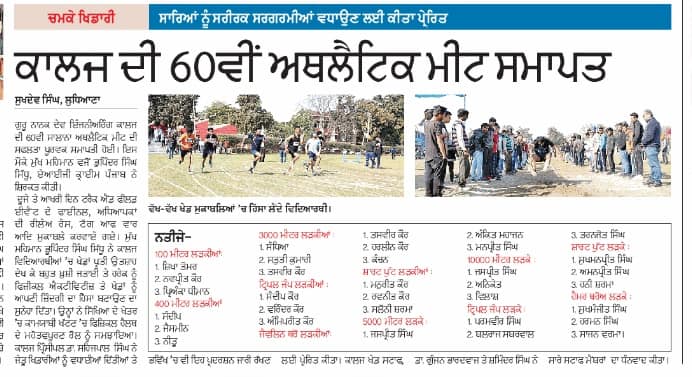 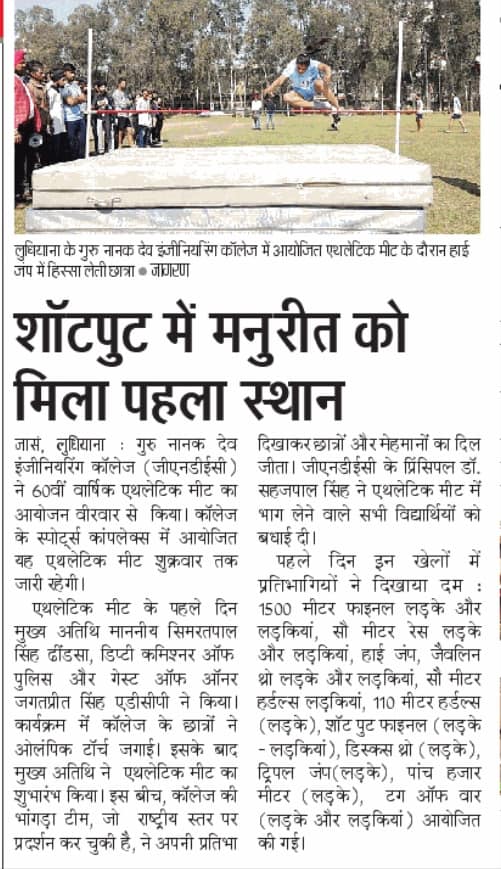 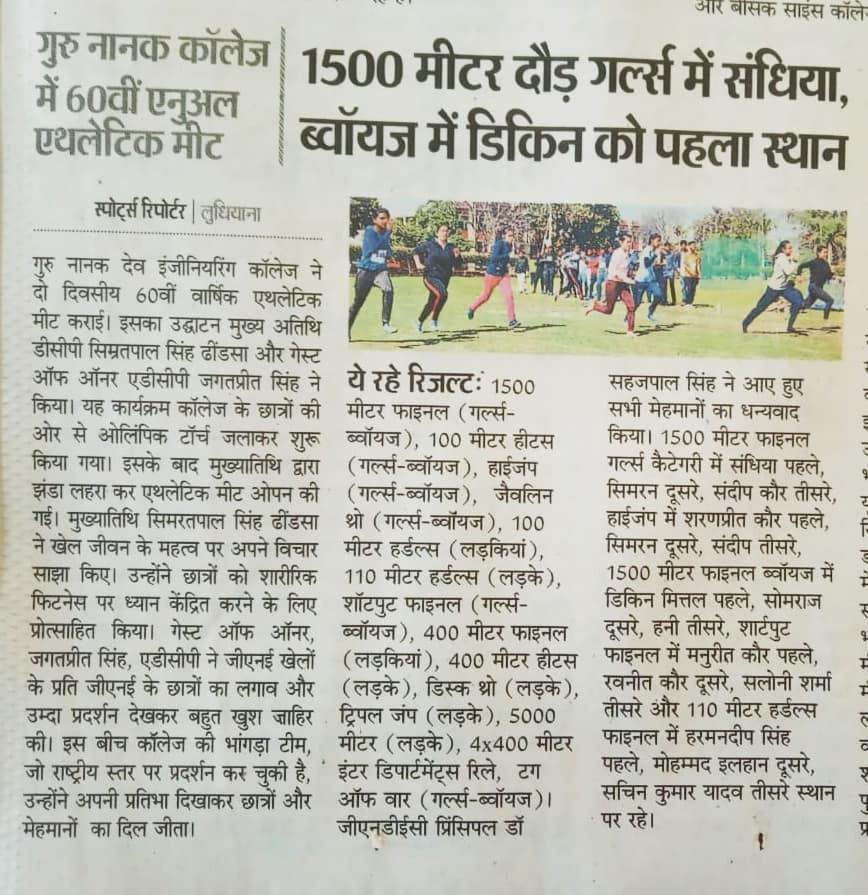